How do I stop my streams from buffering?

Buffering most commonly happens when your Internet speeds are too low to download the amount of data needed to play a video, causing a stream to pause and buffer (download more data) in order to prevent lag.

Buffering can also be caused by the source's ability to transmit that data. If that source (for example, Netflix) is currently experiencing high traffic due to large numbers of people using their server all at once, you will as a result see more buffering during those times.

A small amount of buffering is normal. However, if you are seeing increasing buffers, or buffering to the point where your stream is unwatchable, try the following:

Pause the video for a few minutes

Typically, your device will download the data for a video as you are watching it. Try pausing your video for a few minutes, long enough to grab a snack or take a bathroom break, which will allow your device to download more data to create a larger buffer. 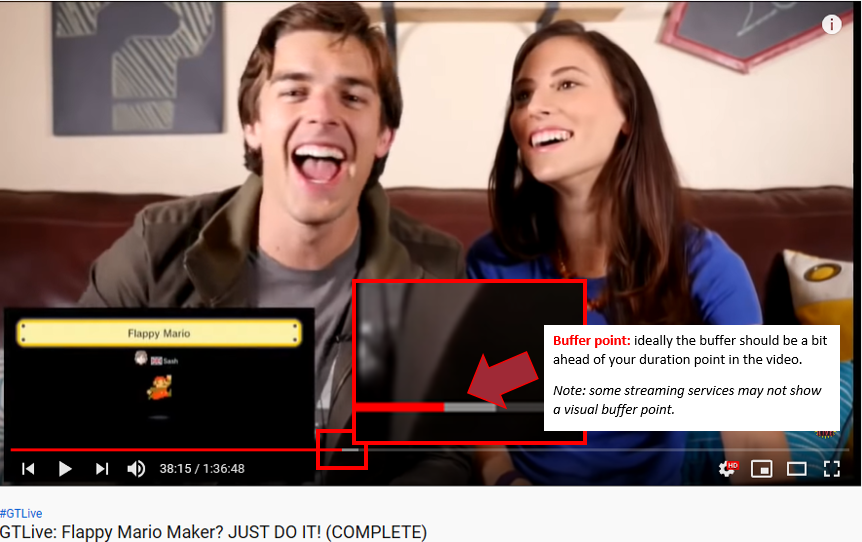 Close and re-open the app

This one sounds like a throw-away fix, but in all honesty restarting the app or even restarting your device can help resolve many connection issues. If you are having issues with more than one device at the same time, you can also try rebooting your router!

Stop active downloads on your device and close any background applications

Other background processes and downloads will consume extra resources and bandwidth that could otherwise be attributed toward live streaming. Exit any games and applications running in the in the background, especially if streaming on a computer. Some anti-virus programs will initiate a "sleep mode" on programs that are not currently in use, to prevent a drain on your computer's resources. On most phones and tablets there is a toggle option to restrict or disable background data.

Limit the amount of devices active on your wireless network

Your router will allocate bandwidth among the devices that are connected to it. More devices on the same network equates to a higher chance of buffering, especially if multiple devices are streaming video simultaneously. Try disconnecting devices that are not currently in use (wireless printers and smart appliances, for example) to help lessen the amount of traffic flowing through your router.

Wait until the server is less busy

Streaming services such as Netflix, Hulu, YouTube, and even CDELightband Streaming may be slower or busier than usual depending on that provider's resources and peak hours. Peak times for Internet traffic can range anywhere from 7pm to 11pm. If you notice buffering, lag, or other connection issues during this time, try again at a non-peak time.

Check to see if your speeds are low

Slow speeds or low bandwidth are the most common cause of buffering. Because wireless connections are more susceptible to interference, there are a number of things that may be causing your speeds to be low. If your stream is disconnecting or buffering frequently, you may be receiving low speeds or high latency to your device. Click here for troubleshooting assistance with your wireless

Move your device closer to the router, or try a wired connection

To reiterate, wireless connections are more likely to be disrupted by problems with signal, frequency, and physical obstructions, such as walls or furniture. Try moving your device closer to your router, your router to a more central location, or switching to a wired connection to help eliminate problems with buffering.

How to minimize buffering while streaming